In Robinson v. City of Clarksville, Tennessee, No. M2019-02053-COA-R3-CV (Tenn. Ct. App. Jan. 31, 2023), plaintiffs owned a restaurant in defendant City. In 2002, plaintiffs sold a portion of an empty lot next to the restaurant to defendant. Plaintiffs claim that the mayor at the time promised that the City would install utilities and build a public alleyway on the property. In 2015, plaintiffs decided to build a second restaurant on the empty lot and asked the City to build the promised alleyway, which the City refused to do. Further, while constructing a sewer line, the City inadvertently placed part of the line on plaintiffs’ property. This suit followed, asserting several contract and property claims, as well as a tort claim for intentional interference with business relationships. The trial court dismissed the tort claim against the City pursuant to the GTLA, and dismissal was affirmed on appeal.

The only tort claim at issue in this case was plaintiff’s claim of intentional interference with business relationships. While governmental entities are generally immune from suit, the GTLA specifically removes immunity for certain claims. At issue here was Tenn. Code Ann. § 29-20-205, which states that immunity is not removed “if the injury arises out of…interference with contract rights.” Based on this language, the trial court ruled that immunity was not removed, but the Court of Appeals disagreed with this analysis.

END_OF_DOCUMENT_TOKEN_TO_BE_REPLACED

Where plaintiff and defendant presented contradicting credible evidence regarding whether all of plaintiff’s claimed injuries were caused by the car accident at issue, the trial court’s denial of plaintiff’s motion for new trial based on her assertion that the jury’s award did not adequately compensate her for her injuries was affirmed.

Plaintiff filed a complaint alleging that she sustained injuries including “a bruised right knee, a neck strain, a lower back strain, a concussion, and chronic headaches, including migraines.” Plaintiff sought damages for past and future medical expenses, loss of earnings, pain and suffering, and loss of enjoyment of life. Defendant admitted fault but challenged the damages claimed by plaintiff, asserting that some of the medical expenses and injuries were not caused by the accident. After a two-day jury trial, the jury awarded plaintiff $16,720, which included $12,270 for medical expenses, $3,000 for past pain and suffering, $1,00 for past loss of enjoyment of life, and no award for future pain and suffering or loss of enjoyment of life. Plaintiff filed a motion for new trial, arguing that the jury’s award “did not adequately compensate her for her injuries and was inconsistent with the evidence offered at trial,” but the trial court denied the motion and confirmed the jury verdict. On appeal, this ruling was affirmed.

END_OF_DOCUMENT_TOKEN_TO_BE_REPLACED

In Trentham v. Mid-America Apartments, LP, No. M2021-01511-COA-R3-CV, 2023 WL 163547 (Tenn. Ct. App. Jan. 12, 2023), plaintiff was a tenant in defendant’s apartment building. Plaintiff’s building was connected to the clubhouse fitness facility by a wooden bridge. On the day of plaintiff’s injury, it had rained the night before and was possibly still drizzling. Plaintiff used the bridge to access the fitness room, and when walking back across the bridge after his workout, plaintiff slipped on what he described as a clear, slippery substance that was “obviously not just water.” Plaintiff could not get his footing to stand up, and an employee of defendant could not get plaintiff back to his feet, so an ambulance was called.

END_OF_DOCUMENT_TOKEN_TO_BE_REPLACED

Where the attorney for an HOA wrote plaintiff landowner a letter informing him that the HOA considered him to be in violation of certain restrictions, judgment on the pleadings in favor of defendant attorney on plaintiff landowner’s negligent misrepresentation claim was affirmed because there was no allegation that the attorney was providing “information meant to guide [plaintiff] in a business transaction.”

In Burgess v. Bradford Hills HOA, No. M2020-01565-COA-R3-CV, 2023 WL 142392 (Tenn. Ct. App. Jan. 10, 2023), plaintiff owned property in a subdivision. Plaintiff and the HOA had a dispute regarding whether plaintiff had violated restrictions with certain signage and noise-making devices on his property.

END_OF_DOCUMENT_TOKEN_TO_BE_REPLACED

When a party failed to file a motion for substitution for more than a year after filing a notice of death, misinterpretation of the law did not constitute excusable neglect and dismissal was affirmed.

In Joshlin v. Halford, No. W2020-01643-COA-R3-CV (Tenn. Ct. App. Jan. 6, 2023), plaintiff husband and wife filed a healthcare liability action based on alleged negligence related to the treatment of husband’s broken hip. Husband died of unrelated causes in February 2014, and in March plaintiffs’ counsel filed a “Notice of Death.” In October 2014, opposing counsel sent plaintiffs’ counsel a letter stating that the case needed a new plaintiff. Eight months after this letter, defendants filed a motion to dismiss pursuant to Rule 25.01, which requires a party to file a motion for substitution within 90 days of a suggestion of death.

Plaintiff responded to the motion to dismiss three days later by filing a Motion for Substitution/Motion to Amend. Plaintiff argued that the substitution was not necessary because plaintiff wife was already a party to the matter and was also the “surviving plaintiff” under the wrongful death statutes. After several rounds of argument, the Court of Appeals eventually addressed this issue on interlocutory appeal, ruling that because plaintiff husband had died of unrelated causes, the action was eligible to be revived but did not pass automatically pursuant to the wrongful death statutes. Instead, plaintiffs needed to follow the Rule 25.01 procedure. The Court then remanded the case for the trial court to consider “whether Plaintiffs’ response to the motion to dismiss should be construed as a motion for enlargement of time, and if so, whether Plaintiff’s failure to act within the prescribed ninety-day period was the result of excusable neglect.” (internal citation omitted).

END_OF_DOCUMENT_TOKEN_TO_BE_REPLACED

Where plaintiff alleged that her son’s body was buried in the wrong place within a cemetery and brought several claims, including negligent mishandling of a dead human body, against defendant funeral home, summary judgment for the funeral home was affirmed based on the finding that the funeral home “had no common law duty to direct or supervise the burial and disposition” of the body and that the funeral home “conformed to the reasonable person standard of care under all of the circumstances.”

In Mathes v. N.J. Ford and Sons Funeral Home, Inc., No. W2021-00368-COA-R3-CV, 2023 WL 117729 (Tenn. Ct. App. Jan. 6, 2023), plaintiff asserted claims for mishandling of her dead son’s body. Plaintiff had purchased an interment plot from the cemetery prior to her son’s passing and had executed certain documents related to that purchase. One such document provided that “all interments and disinterments…shall be made only by [the Cemetery] unless otherwise approved by cemetery company.” The cemetery and funeral home were not related to each other in any way.

After the son’s death, plaintiff contracted with defendant funeral home to handle the funeral and body preparation. Plaintiff also signed an additional authorization with the cemetery and went to view the pre-selected plot at the cemetery.

END_OF_DOCUMENT_TOKEN_TO_BE_REPLACED

Where defendant’s counterclaim asserted the conversion of its real property through a transfer that “was not supported by consideration, was commercially unreasonable, and made under economic duress,” and that alleged conversion occurred less than ten years ago, summary judgment in favor of plaintiff was vacated. Summary judgment on defendant’s counterclaim for civil conspiracy was likewise vacated.

Bryan College v. National Association of Christian Athletes, No. E2021-00931-COA-R3-CV, 2023 WL 128275 (Tenn. Ct. App. Jan. 9, 2023) arose out of a transfer of property to Bryan College from National Association of Christian Athletes (NACA). NACA had owned a Christian camp with extensive facilities for many years. After allegations of misconduct were made in 2009 against one of NACA’s founders, NACA began “to pursue a change to leadership with the help of Bryan College.” Several members of the NACA board were replaced with individuals associated with Bryan College, including Steven Livesay, who was the president of Bryan College and became the chairman of NACA’s board.

In 2016, NACA’s board passed a motion to transfer ownership of the camp from NACA to Bryan College. As part of the deal, NACA would retain use of the camp and Bryan College would assume the debt owed on the camp ($920,000). At the time, the camp appraised for $7 million. When contemplating the transfer, NACA was given a lease that said it would only have to pay rent during years that Bryan College failed to end “its fiscal year in the black.”

END_OF_DOCUMENT_TOKEN_TO_BE_REPLACED

I strongly encourage you to add “Trial Tested” to your list of podcasts.

“Trial Tested” is a podcast sponsored by the American College of Trial Lawyers.  It “presents enlightening discussions about life and law through interviews with prominent trial lawyers and significant figures in the world of trial law.”  The interviewees are accomplished trial lawyers (with a couple of non-lawyers thrown in for good measure) interviewed by one of three College Fellows –   Amy Gunn, Mike Herring, or Dave Paul.

Click here to see a list of the podcasts offered to date.   Tennessee’s own Mike Cody is interviewed for today’s podcast.

You have just a few days to obtain a pre-publication printed copy of my new book, Tennessee Wrongful Death Law at a substantial discount. 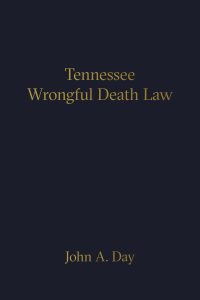 The book is Tennessee’s only comprehensive treatise on the law of wrongful death.  It has 82 sections and cites hundreds of Tennessee cases.

Click on this link and scroll down to see the Table of Contents.

END_OF_DOCUMENT_TOKEN_TO_BE_REPLACED

Please take a minute to check out my newest blog.

Practical Procedure and Evidence  is created to help Tennessee civil trial lawyers stay current on civil, appellate, and evidence issues.   It will include not just new cases and rule changes but will also give lawyers practical tips on how to handle certain evidence and procedure issues in their practice.